After a long (long long long long) break, I’m back. It turns out writing a PhD thesis is somewhat draining, and while I have managed to get out a fair bit, I’ve not managed to do much writing (…you may have noticed).

That being said, a quick glance through the photos on my camera (I’m now using a Panasonic Lumix DMC-TZ35) show two good little wanders I’ve done: a 4 day trip to Scotland with some biologist friends, and a day trip to Keswick, which I’ll write posts about in the not too distant future. 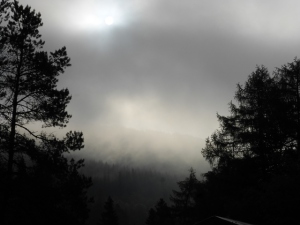 I’m currently still living around Sheffield (though a different part of Sheffield, with new places to wander), with one or two exciting irons in the fire (not literally) for the next few months.

In the meantime, due to the technicalities of travel (and not being able to carry too much stuff with me on a train), I’ve started drifting into the world of minimalism. For those who don’t know (the majority, I suspect), minimalism is basically living with less stuff so that life is a bit more simple. I’ve now been living for a month or so using only the stuff I could fit into my 45 litre rucksack. It’s certainly an interesting experiment, however I’m finding that not much has changed… which makes me wonder why/how I managed to fill a whole massive estate car with stuff when I left my old house. It also makes me wonder if I can manage using a smaller bag (perhaps 30 litres). A particularly interesting challenge heading toward winter….

While this generally hasn’t affected my rambling/ecological habits, what has changed is the footwear I now use when walking. I’ve ventured into the world of “barefoot running shoes” and got myself a pair of Merrell Trail gloves. These are basically superlight shoes with very flexible soles and absolutely no ankle support whatsoever. If you stroll back to my previous post about footwear, you’ll notice that back then I was using full walking boots. I’m still a big fan of walking boots, however particularly in the current hot weather we’re having, the breathable fabric and lightweight nature of the trail gloves is fantastic. They also have a vibram sole, which is very tough, and has a good grip on it too, making them excellent for longer walks.

Finally in terms of this catch up, I’m very pleased to say I passed my PhD viva the other day (with minor corrections, for anyone who’s interested), so now I’m trying to figure out what people do when they aren’t writing up a thesis.

Anyway, that’s just a vague post to catch up on where I am, and what I’m doing. More content will be coming soon

Published by The Rambling Ecologist

View all posts by The Rambling Ecologist

One thought on “Brief Catch up”