Welcome to a blog post which will be pretty long, covering Wanaka all the way to Te Anau, due to missing one out at Queenstown, for reasons which will become clear later in the post. I had planned for the Wanaka to Queenstown section to take 4 or 5 days, going very gently from hut to hut. However unfortunately I ran into overpopulation problems, and ended up storming through in 2 days (well, 2 days to Arrowtown, and then a very gentle day through to Queenstown).

From Wanaka I followed the lake shore round to Glundhu Bay, which as far as I can tell is just one giant campsite. On the lake were a ton of people water skiing and cruising about in boats, but there were surprisingly few people out walking. I reached Glendhu bay pretty early, so decided to push on to Fern Burn hut, the first of a series of newly built huts over the section, which travels through land owned by Mutt and Eileen Lange (Mutt Lange being a music producer, and Eileen Lange being aka Shania Twain), who funded the building of the huts. I met a couple of people on the way who were heading back from Fern Burn and warned me that there were “quite a few people” heading that way. The approach was fairly steep, but nothing compared to other “trails”, and so it didn’t take me long to reach the hut. 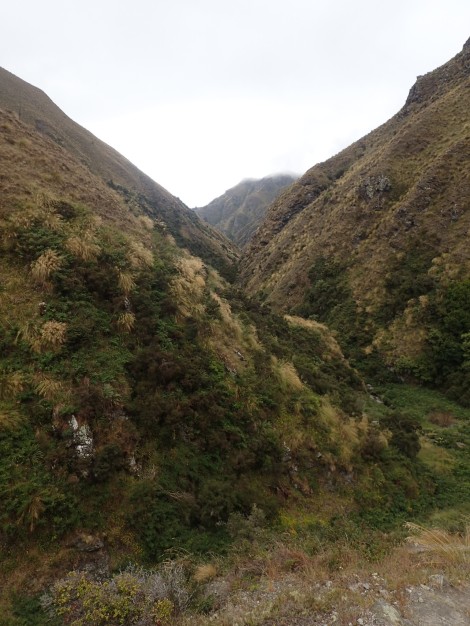 On arrival, I discovered that the hut (a comfortable 12 person hut) was full (yes, full) of the Auckland Tramping Club, and there were 8 (yes, 8!) tents outside the hut (I think there was another tramping club there too). Now call me old fashioned, but when I head out to the wilds to get away from the bustling city life, I generally aim for population densities which are smaller than most city centres. With this in mind, I ended up shifting on another 8km over several high saddles and through a load of soaking vegetation to the next hut. This was another 12 person hut, and had another 6 of the Auckland Tramping club in it(!), as well as an American and Canadian TA walkers heading north. At least I actually had space in the hut this time. 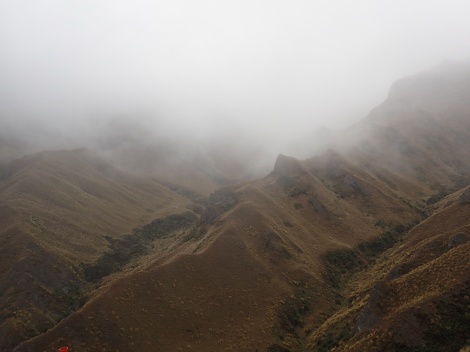 Unfortunately, I’d entered cloud just above Fern Burn hut, and had been inside the whole way to the second hut. After sleeping in a little, the cloud continued the next day over to Rose’s hut, with visibility around 30 metres, leaving the ” fantastic views” which my guide book promised, thoroughly hidden. When I arrived at Rose’s hut (about 7 hours of walking through clouds), I caught up with the 6 ATC members who I’d stayed with the previous night, and discovered that they were waiting there to rendezvous with the other pile of ATC that evening. Time to move again…

From Rose’s hut to Macetown was another section which was rather beautiful, but would’ve been more enjoyable if I could have seen beyond arm’s reach. This involved a “shortcut” down the arrow river, which (in true kiwi style) was quite literally “down the Arrow river”. However my boots were soaked anyway from the vegetation anyway, so I just went full kiwi and strolled down the river, boots and all. Macetown is a gold mining town from the day of the goldrush, however since the gold trailed off, everyone moved out, and now it’s empty and just a tourist attraction. While the human population of Macetown is zero, the sandfly population is about 3 billion. This meant I was quickly chased into my tent, and lost about a gallon of blood on the way.

In the morning, packing up took about 2 seconds, and then I ran from the campsite… not that I would let simple insects get to me of course. The road to Arrowtown was a 4×4 track with “several river crossings” (I counted 22), down some lovely steep sided valleys. Arrowtown itself seems to be one very touristy street, but quite pleasant nonetheless.

Arrowtown to Queenstown was quite a generic walk through golf courses and rural farmland, and on arriving in Queenstown I found the cheapest accommodation I could get was $25 per night (gone are the days of the $10 campsite). Though I was very tempted to just leave there and then, I needed to print out a new set of maps and get some food etc, so stayed briefly. As it turns out, Queenstown is without doubt the most expensive, overcrowded, and alcohol fueled place I have been in New Zealand, and hence I didn’t stay long enough to write a blog post, never mind post one.

Though the Te Araroa notes say you should get a water taxi from Queenstown to Greenstone wharf (about 40km up a lake), that would have cost me the vast majority of my remaining money, so instead I took a bus up the lake to Glenorchy, and then walked round to Kinloch and then Greenstone. It was only an extra 38km walk… it seems I’ll go to great lengths (pun intended) to avoid spending money.

For this section again I had intended to go slowly, and I almost managed, but it turns out even when walking slowly/short distances I still eat a lot (as an example, my museli suggests a single portion is 50g, I’ve been eating 250-300g for breakfast, and still been a bit peckish…). The Greenstone hut was very pleasant, with a Ranger and flushing toilets!

Heading up the valley was one of my favourite parts of the Te Araroa so far, with amazing scenery, hardly any people, fantastic silence, and perfect weather. On reaching the Boundary Hut, I found an American fisherman, a Luxembourgian (is that the right term?) northbound Te Araroa walker, and a campervan housing two English fisherman (almost in their 70s), who were clearly enjoying their second childhood. That night that 5 of us stayed up until about 11:30 (very late for me), looking at the totally cloudless night sky (the stars were only rivalled by my experiences out in the northern territory) and enjoying some wine and beer (and pasturised Brie, which had the consistency of cheddar) which the fishermen had brought up.

I then took a detour up the next valley, to go to the Forks hut, where I found another pair of fishermen (who were just leaving, but not before they gave me a bit of the rainbow trout they’d just caught and cooked). This was a brilliant decision, as the Forks hut is well out of the way, and gave me my first (and possibly last) totally remote experience in a long time. Truely magical. Unfortunately, doing the maths, I discovered that my “9 days worth of food” was going to last perhaps 3 more days (totalling 7, at a push), and so it was time to get moving again.

The shore of Mavora lake is a beautiful Beech forest (for Lord of the Rings fans, it’s where they filmed the bit at the end of the first film where the they get in a fight and Boromir dies… er, spoilers) and with the peaks all around it really is rather spectacular. In a feat of unparalleled trudging, I ended up getting nearly 4 hours from the bottom of the lake when I camped that night.

The following day was just a fairly generic road walk, with very sore feet, down to state highway 94. Though the trail continues straight across the highway, I had to head to Te Anau (the nearest town, and where I am now) to pick up some more food, and have a bit of a break, so I tried my first ever actual hitchhiking. Standing at the side of the road (for about 20 seconds) I saw my first vehicle approaching, stuck out my thumb, and it pulled over… well that was easy. As it turned out, the driver was going to his friend’s wedding in Te Anau the next day, and was a really nice guy, so we had some hilarious conversation (which of course swung round to the rugby world cup eventually), and he gave me a tour of Te Anau before dropping me off. Kiwis are just lovely folks.

Now I’m in the final few weeks of the journey, and becoming somewhat sad that soon I’ll be leaving this fantastic country. That being said, my feet, knees, and hips will be glad to reach Bluff, and I fear most of my clothes/equipment will reach the end of the road at Bluff too. I’m increasingly noticing that when I’m in settlements, even wearing my absolute best clothes, I still look pretty much like a homeless person. Ah well, I understand why the kiwis call it “tramping” rather than hiking now.